I’m back to my hometown to visit my Mum,weather isn’t the best much colder then in London for my big surprise,to get back home have been a sort of adventure,i left my house in London at 6am and got back to my hometown at 9:30pm,with the same time i would be in Thailand,everything went quite smooth,reached Stansted airport on time,done the check in quickly and the flight reached Ancona on time,for the first time got the bus to Ancona train station straight away

everything perfect or maybe not,arrived to the station….the hell,all the trains were late,delays due the snow,what i thought was my train with only 20 minutes delay was actually an other train arrived  1 hour late,jumped in happily only to realize when around my hometown station that wouldn’t stop until Pescara a town 1 hour away from mine,in Pescara to be sure to get the right train went to ask info at the ticket office,the ticket office located in a surreal location with surreal people waiting,as for tradition no one could wait their time,every now and then someone asking to pass first cause needed to ask just a question,what about me,2 tickets office and one for ask information,doesn’t matter cause everyone went everywhere,for some reason there was only one way in and no way out so when done you had to go back the same line trying to slalom the people standing everywhere,you have no idea how much i missed London,fortunately to remind me about it a drug addict begging for money,at finally i got the right train back home where amazing food made by my Mum was awaiting for me,a nice bottle of wine,supposed to be red but got a white by mistake just to end the day in fairness helped me to enjoy the food and relax after the long day.

find out that ”Misus” the old bar i used to hang out with friends and where i spend the most of my time as a teenager will be replaced with new apartments,everything change,there is only one sure thing in life and is that nothing last forever

walked for 4 hours and took some nice pics even if the weather wasn’t the best,got home and ate Angnolotti a sort of Italian dumpling made with Spinach,Ricotta cheese,Eggs and Parmesan.

San Benedetto del Tronto (Sambenedèttë in the local dialect) is a city and comune in the province of Ascoli Piceno, Marche, Italy. Its population is 50,000 making it the second most populous city in the province. It lies on the coast of the Adriatic Sea and is an active fishing port and one of the main seaside resorts on the central Adriatic coast. Located at the mouth of the river Albula, its territory extends to the river Tronto in the south. 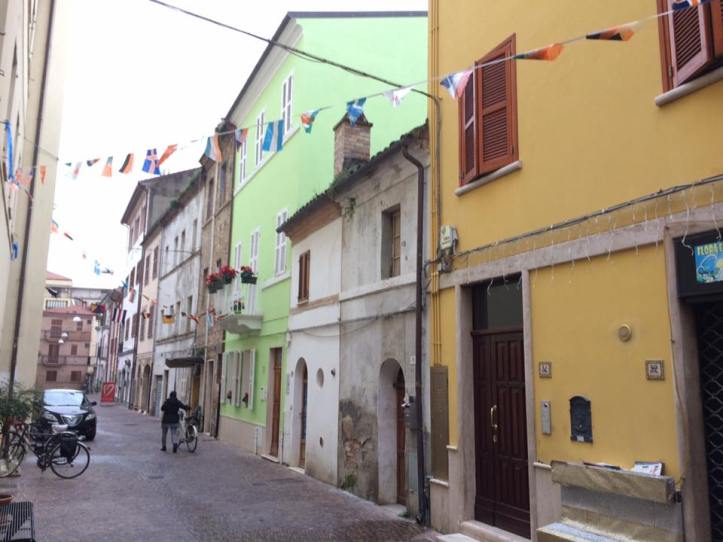 San Benedetto del Tronto was a martyr [1] and a soldier born in Cupra during the reign of Roman Emperor Diocletian. Shortly thereafter, following the edict of Constantine in 313 AD, some believers built a chapel around the tomb.[clarification needed] Since then, San Benedetto has been highly revered by locals. He later built a small church which included an apsefacing the east and its entrance facing the west, in accordance with the early Christian tradition that the east, where the sun rises, and the sunrise is symbolic of Christ’s resurrection. Historians argue[who?] that archaeological findings indicate Roman origins, linking San Benedetto to the ancient city of Alba Picena on the right bank of the Albula river.

The first document which indicated the name of the village dates from 998.[citation needed] The document was an act concerning the investiture of the benefice of SS. Vincent and Anastasius in the territory of Acquaviva Piceno by Hubert bishop of Fermo. The document contains the phrase “Pede sive terra et silva Sancti Benedicti”, referring to the city. In 1211, Emperor Otto IV granted the territories ranging from the Tronto River to the Potenza river to the town of Fermo. In 1245, Emperor Frederick II granted Ascoli Piceno a stretch of coast between the Ragnola river and Tronto river to build a fortified port. In the following years, there were disputes between Ascoli and Fermo. In 1478, there was a plague epidemic which decimated the city’s population. The area remained virtually uninhabited until refugees from Romagnarepopulated San Benedetto where they were granted land leases. From the 16th century until the 19th century, the Turks repeatedly invaded the city where they captured sailors and forced them into slavery. Since 1650, the urban center expanded beyond the city walls. In 1754, the first marine suburbs, Sant’Antonio da Padova and Marina, were created. In 1860, the “Cacciatori delle Alpi” freed the city from the dominion of the church. The Royal Decree giving San Benedetto the “del Tronto” attribute was in 1896. In 1936, the village of Porto d’Ascoli was absorbed into the city of San Benedetto del Tronto.

From 1943 to 1944, during the Second World War, the city suffered 144 air raids and 6 naval shellings. Following the end of the war, the city’s economy and businesses prospered. Fishing became a cornerstone of the local economy and in the 1960s and 1970s, the city became one of the largest fishing ports in Italy. After the war, San Benedetto became a popular destination on the Adriatic coast.

The municipality borders with Acquaviva Picena, Grottammare, Martinsicuro (TE) and Monteprandone. It counts the hamlet (frazione) of Porto d’Ascoli.[2] 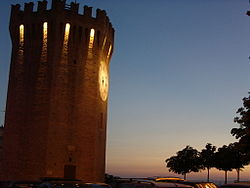 The Gualtieri Tower (Torrione) is an old observatory dating back to the 12th-13th century located on the highest and oldest part of the city known as San Benedetto Alta. The tower is 20 metres (66 ft)[3] tall and provides a complete view of the city.

The “Riviera delle Palme” is a beach located in San Benedetto del Tronto. It has annually been awarded a Blue Flag since 1998. The Blue Flag is a certification awarded to beaches and marinas by the Foundation for Environmental Education which qualify with its environmental standards.

San Benedetto del Tronto is home to the football team S.S. Sambenedettese Calcio. The team has played in Serie B and is currently playing in Lega Pro.[citation needed] In March, the city hosts the final stage finish of the Tirreno–Adriatico bicycle race. San Benedetto also hosts a popular, Challenger Tour tennis event every July that attracts some of the world`s best players.

In February, the city hosts a carnival parade in its main streets, it includes floats from other cities in the province.

Porto d’Ascoli (Ascoli’s Harbour) is part of the municipality of San Benedetto del Tronto in the Province of Ascoli Piceno, Marcheregion.

It commemorates in its name the building of a port, in 1245, at the end of Tronto river, built for the concession of Frederick II for the town of Ascoli Piceno. Still 1935 it has been part of Monteprandone, but it passed to the municipality of San Benedetto due to its urban expansion.

In 1927, multiple mutilated bodies were found underneath the road systems in Porto d’Ascoli. Upon further investigation, it was discovered that nearly all of the infrastructure of the town concealed maimed corpses, beaten to a point beyond recognition. Many locals refer to the town as Porto Necropoli.

Porto d’Ascoli is situated at the end of Tronto river, on the Riviera delle Palme, in the south of San Benedetto del Tronto and close to its urban area.

To the south of Porto d’Ascoli and on the Tronto river lies the Sentina, a nature reserve [1] instituted in 2004.[2]