When I arrived in Bangkok there was only one thought in my mind,going to visit Tiziano Terzani house where he lived from 1990 to 1994 and wrote one of his most famous books ”A fortune teller told me”

After recovered from the jet lag and settle in my new accommodation I began to do researches regarding the location of the Turtle house the name that Tiziano Terzani gave to the house after find out there was a huge Turtle inside the lake in the garden,what is amazing about this house isn’t only the fact that this famous writer  inspired so many people around the world and wrote one of his most famous books there but even because this old Thai traditional wooden house with a lake,tall palm trees,a thick vegetation that make you feel you are living in the jungle was in the middle of the busiest part of Bangkok surrounded by an other jungle but made of concrete and condominiums. 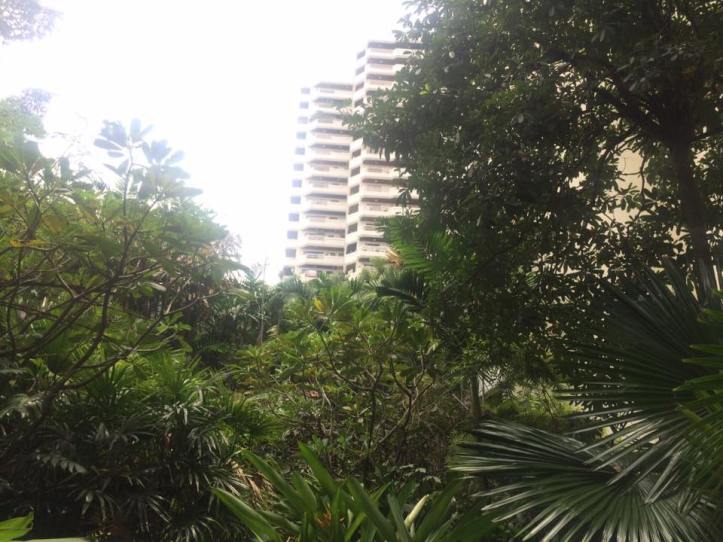 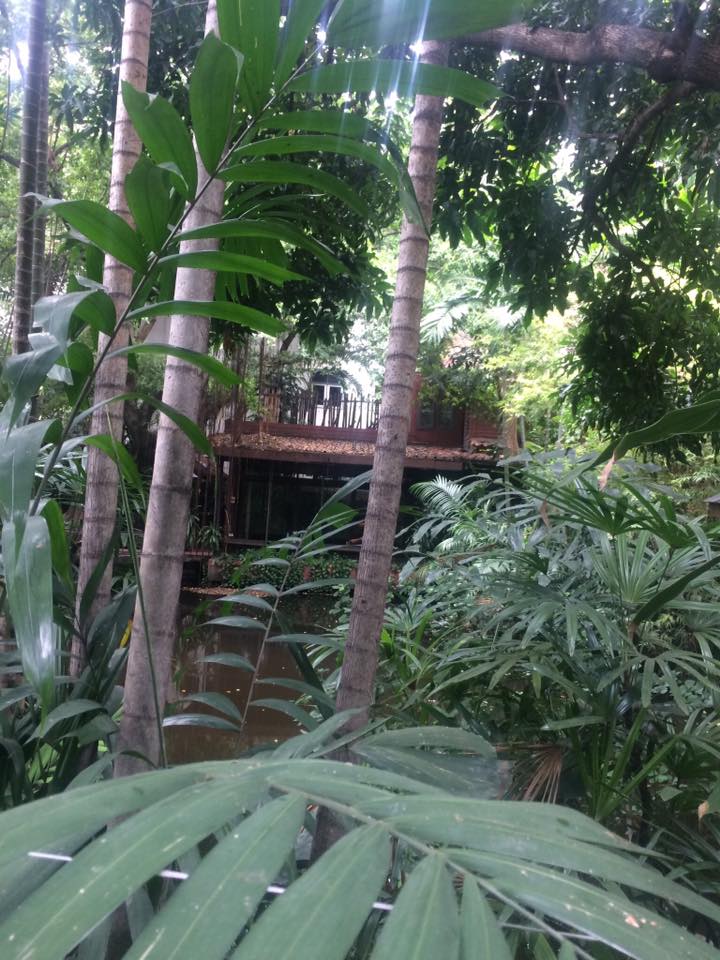 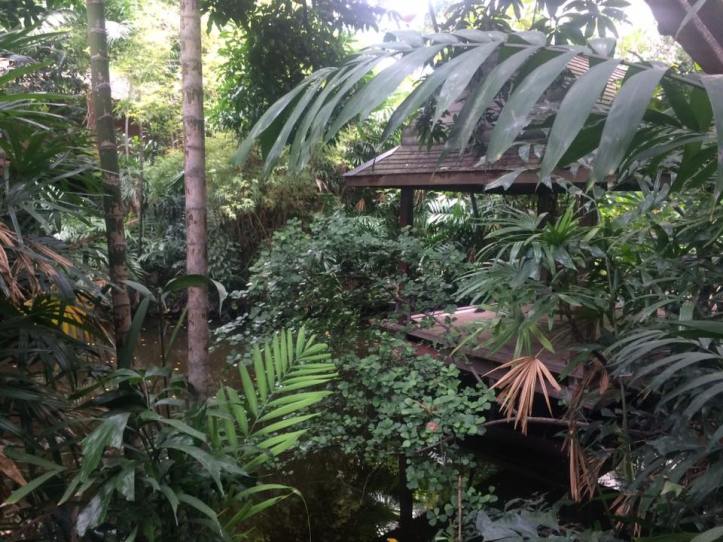 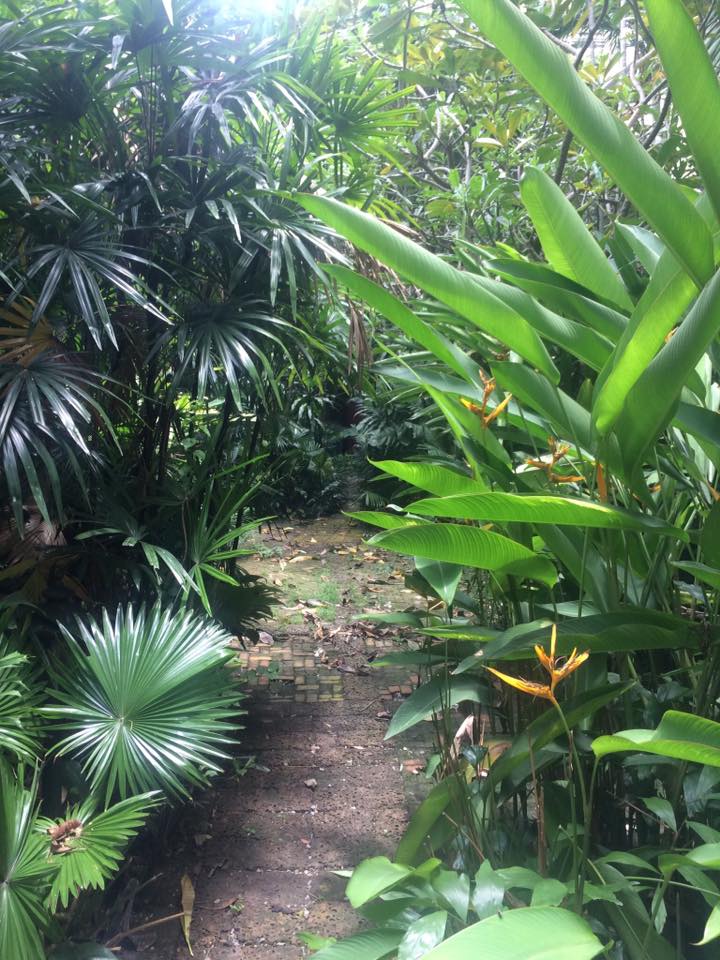 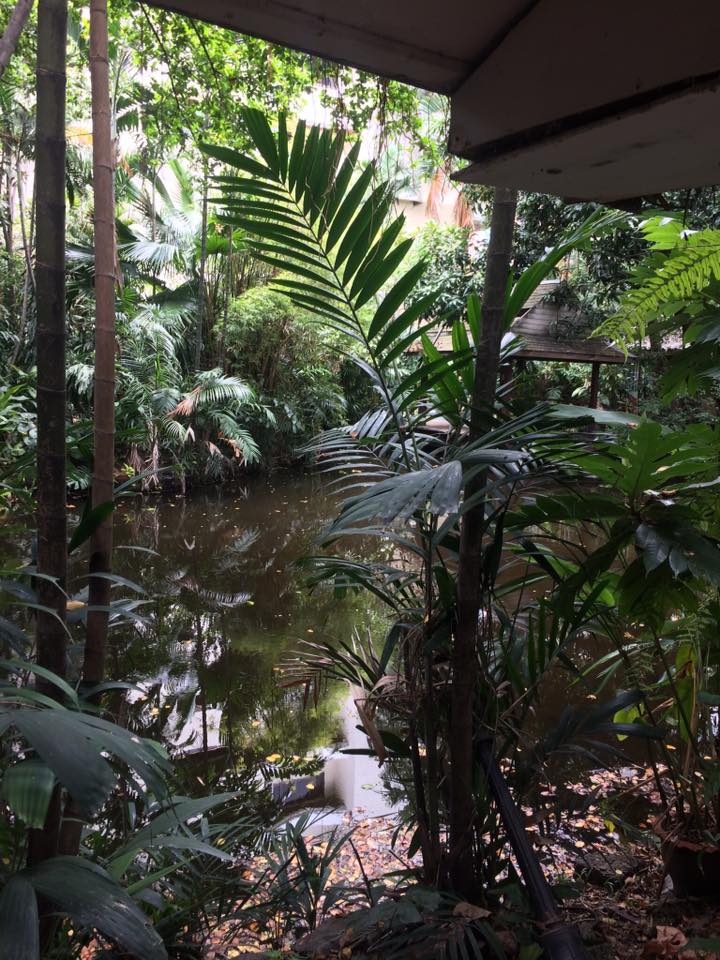 Find the house was harder then I thought what I thought was the right address turn out it wasn’t I went to the wrong address twice and even wrote an article where I said the house was gone,unfortunately the house will be gone on sunday 19\8\2018,have been bought from a  Thai building company and they gonna turn it in a condominium,life can be sadly sarcastic sometime thinking that one of the thing Tiziano Terzani hated most was this chasing the profit to any cost and In the name of money hidden with the name modernization we ruining our beautiful planet destroying the nature and part of the history that sometime would be wonderful to preserve.

As I said I went to the wrong address twice but at the same time through my researches I find out that an Italian association named ”Dante Alighieri” trying to stop the sale of the house to preserve the memory of Tiziano Terzani created  ”An oasis of culture,Italian library dedicated to Tiziano Terzani” the office is at the International campus of the University of Rangsit

On Wednesday I planned to visit the library and checking on Internet more info happened to find an interesting blog dedicated to the Turtle house,I don’t know why I decided to read it I already knew about the house but at the end something caught my attention the address was different then the one I went,A thought in my mind became louder and louder,maybe I made a mistake,maybe this one is the right address,I done some more researches and found an old review of a Thai restaurant that years ago rented the turtle house,the address was the same I had to check it out.

I got ready took the bus and then the train and arrived at Phrom Phong the nearest station to the house,I typed the new address on my Apple maps and excited I followed the new route when arrived  disappointment took place instead,what I had in front of me was a condominium,so then even if the address was right the house was actually gone,from the road I could see a big garden near the main entry and an old wooden gazebo drawn my attention,it looked like the one in the turtle house garden that many bloggers chose to take a picture,I thought that maybe was what left of the house,I wanted to see more and walked in inside the garden,the building security stopped me straight away,I tried to explain why I was there but he didn’t speak English,fortunately he took me to the building receptionist that could speak a perfect English,I explained why I was there and ………. God bless her she told me that what i was looking for was just next door,I thanked her with a huge smile and moved excited to the next building that at finally after so many researches, 2 time wondering around the wrong locations I was in front of the famous Turtle house,the gate was open and as soon I stepped in a lovely Thai man welcomed me,was him the famous Kamsing the old House’s guardian that lived and worked there for 42 years,he understood straight away why I was there he told me many people especially Italians comes to visit the house,I didn’t want to ask him about Terzani cause I’m sure everybody does and I was worry I might annoying him but instead I told him how famous he was,all the articles about the house would talk about him too and many bloggers took a pic of him made me really wanted to know him,he smiled and looked really happy,he guided me around and explained what will happen to the house,unfortunately I already knew but he told me something more I didn’t,probably the house will be rebuild and relocated in an other suburb to preserve a part of Thai history and probably thanks to Dante Alighieri association that fought to save the house it might become a museum dedicated to Tiziano Terzani,I really hope so,the house is amazing and I understood why he liked it so much,in the middle of the busiest part of the city and surrounded by condominium the old wooden house protected by tall Palm trees the  thick vegetation and the beautiful lake makes you feel to be in the jungle and teleport you back to a time that is gone a time where people even if poorer probably was happier,I can’t believe will be demolished to build an other boring,soulless concrete building in the name of profit,I understand Tiziano Terzani,I understand things those businessman can’t understand yet,I lost my father in the name of profit,in the name of someone else profit that left my father to pay a debt he never made and left him to die after few months and left my family to pay a debt we never made,so I understand Tiziano Terzani when he talk disappointed about our society driven by money,a society that forgot why we are here on this planet,a society that forgot about  our fellow human beings feelings and  replaced the word Love for the word money,I hope we will learn before is too late. 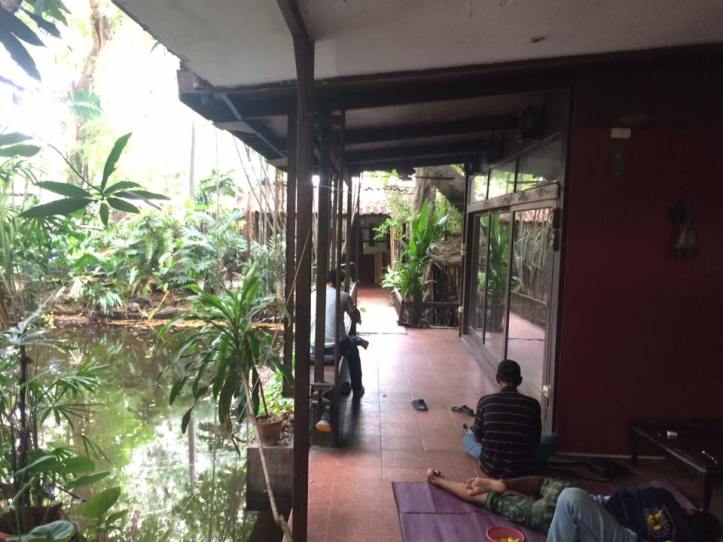 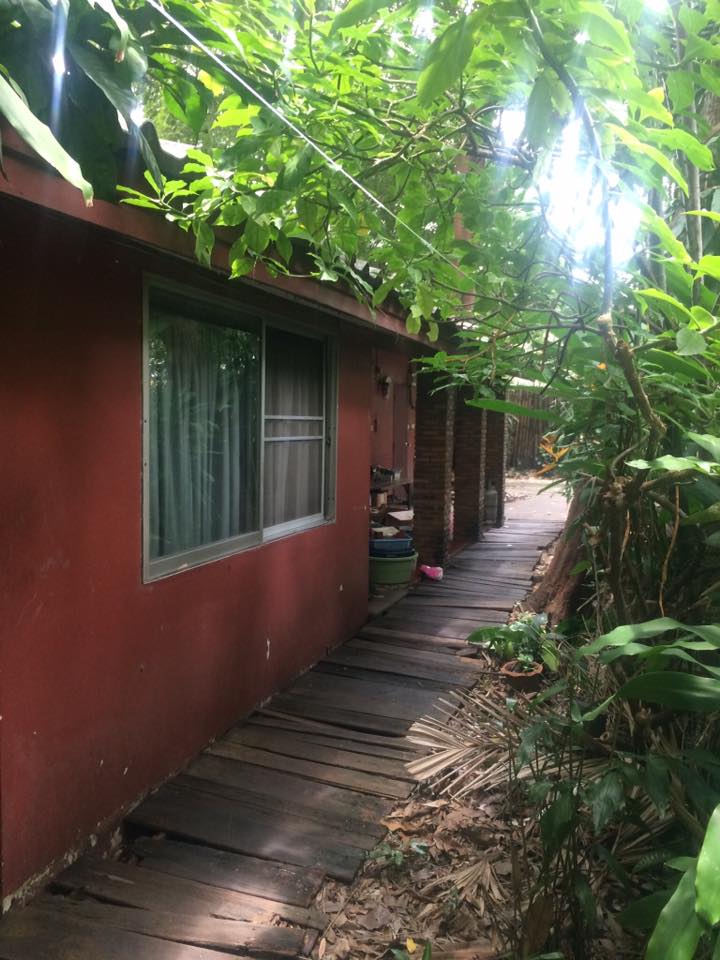 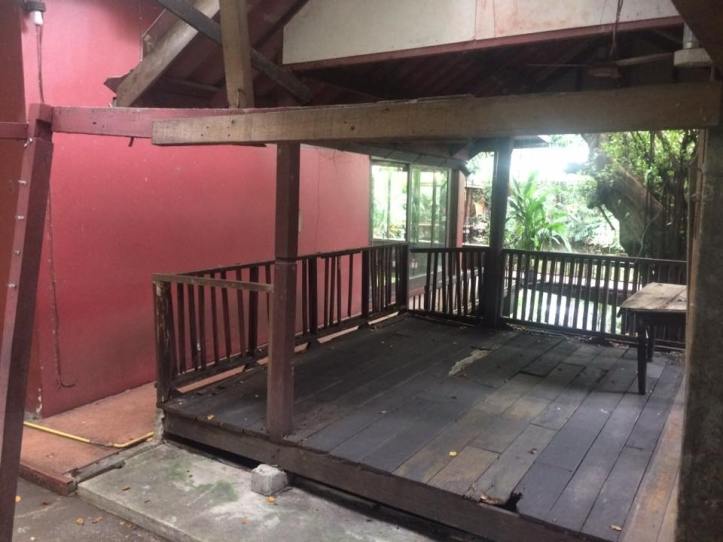 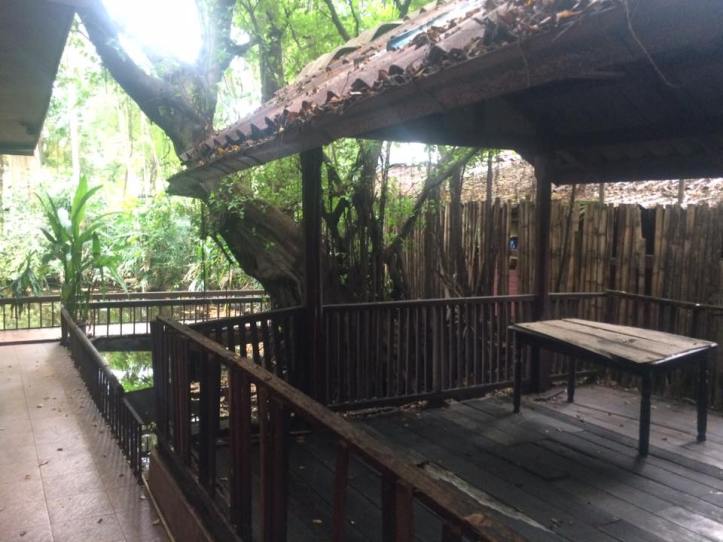 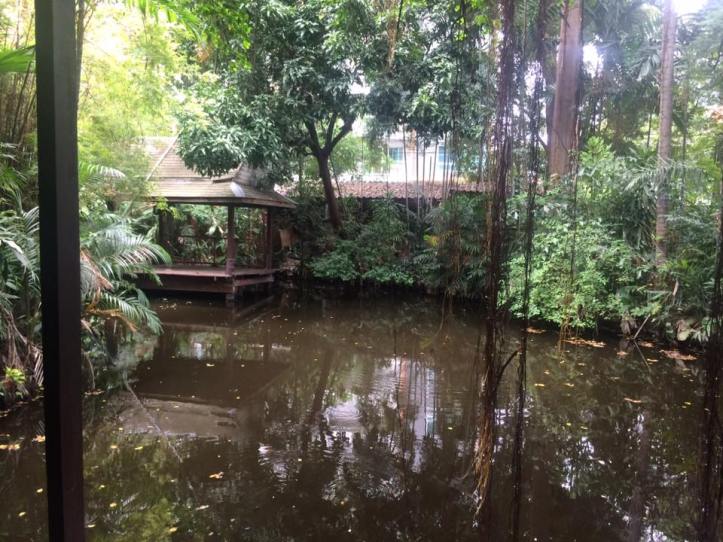 I left and said goodbye to Kamsing but after few hours wondering around the city I felt like I should have spend more time observing and exploring the house that the importance of that house required from me more attention,I mean,Terzani is the main reason for me to coming to Bangkok  to open a cafe’ and follow my dreams for new adventures and the main reason to start  this blog,I thought about to go back but then I told myself,I chose to leave earlier I made a choice and I need to learn that when I make a choice I have to stick with it but Universe\God had other plans,a friend,a special friend called me and sharing the same passion for Terzani’s books I told her about my visit at the turtle house,surprised that I was there she asked me to go back and take a video to then send to her,so happily I headed back asked Kamsing if I could make a video of the house and spend a great time recording and enjoying that magical place. 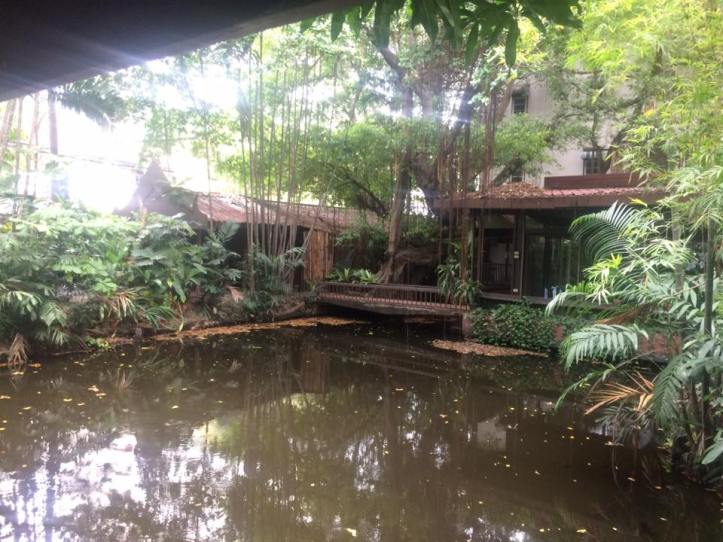